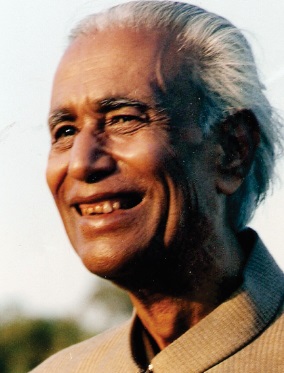 Dharmveer Bharti did prolific work in the field of Hindi literature as a writer, playwright, poet, editor and journalist. As chief-editor of the weekly Dharmyug from 1960 until his death in 1997, he set the standards of excellence in journalism in Hindi and the magazine reached unprecedented levels of success. During the Indo-Pak war in which Bangladesh received independence he played the courageous and daunting role of a war journalist.

Born in Allahbad, he did his complete education there, uptill PhD from Allahbad University. Study and travelling were his two interests. Along with his course work he read Shelly, Keats, Wordsworth, Tennyson, Emily Dickenson and translations of many French, German and Spanish poets| He read the works of classic writers such as Sharatchandra, Gorky, Charles Dickens, Victor Hugo and Tolstoy in depth.

His poetry books are: "Thandaa lohaa", "Saat Geet VarSh", "Kanupriyaa", "Sapnaa Abhee Bhee", "Aadyaant". "Andhaa Yug" is his famous play in verse that has been staged by many prominent directors. "Gunaahon kaa Devataa", "Sooraj kaa saa(n)tavaa ghodaa", his famous novels. Dharmveer Bharti was honored by several awards, some prominent ones being the Padmashree in 1972 for his contribution to Hindi literature and the Sangeet Natak Akademi award in 1988 for his work as a playwright.