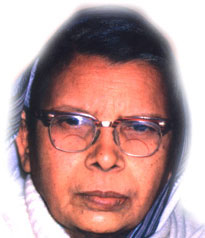 Mahadevi Verma was born in Farrukhabad. She did M.A. in Sanskrit from Prayag University. She then became principal of Prayag Mahila Vidyapeeth and remained in that post lifelong. Mahadevi Verma is the nightingale of pain, also known as the Meera of Hindi literature. She received the Gyanpith Award for her poetry collection "Yama". She was awarded the Sahitya Akademi Fellowship in 1979, Padma Bhooshan in 1956 and Padma Vibhooshan in 1988.

As she recalls in her memoir "Mere Bachpan Ke Din", she was fortunate to have been born in a liberal minded family. At a time when daughters were considered a burden, her grandfather wanted to educate her and make her a scholar. Her mother was fluent in Sanskrit and Hindi and was religious minded. It is from her mother that Mahadevi received the inspiration to write poetry and take interest in literature.

Mahadevi Verma is considered one of the pillars of the Chhaayaavaad era of Hindi literature along with Nirala, Jaishankar Prasad and Sumitranandan Pant. Her writings in prose are well acclaimed too, and she was good at painting too.