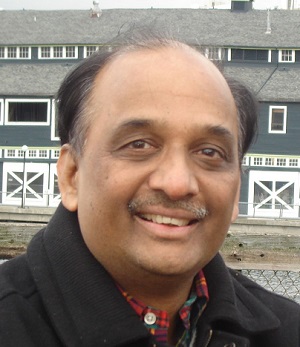 Anoop Bhargava is a Technology person by profession and a poet by heart. From his early childhood, he was fascinated by Hindi poetry and wrote his first poem at the tender age of 9.

His first poem was published in a literary journal when he was 13 years old. Since then he has been writing regularly, winning several awards at All India Level in his college days. He did his Engineering from BITS Pilani and then Masters from IIT Delhi. He was the Editor-in-Chief of the Hindi Magazine at both places.

Anoop came to the United States in 1983 but kept his love for poetry alive. He was instrumental in bringing good poetry to America by inviting poets like Gopal Das Neeraj, Ashok Vajpeyi, Som Thakur, Dr. Kunwar Bechain, Ashok Chakradhar and organizing their Kavi Sammelan tours in various cities of USA.

Due to his technical background, Anoop realized the importance of internet early and founded a Yahoo group called ‘eKavita’ in 2003 to share and spread poetry through the use of emails. Today after 17 years, eKavita is one of the most vibrant groups related to poetry with more than 700 active members from all over the world. Anoop has also been associated with ‘Kavita Kosh’ – the biggest collection of Poetry on the Internet since its early days and contributed to its success between 2008-2011.

According to Anoop, poetry is not an option, it just happens. Anoop and his wife Rajni, are frequently invited for Kavi Sammelans/Mushairas across the United States. Anoop is known for his rendition of short and crisp poems.

Anoop was a member of the ‘Core Organizing Committee’ for Eighth World Hindi Conference held in New York City in 2007. He presented a paper on ‘Use of Technology to promote Hindi’ at the conference and was also invited to participate in the Kavi Sammelan. He was also responsible for Live Broadcast of Conference over the internet. Anoop was invited to Eleventh World Hindi Conference held in Mauritius in 2018. He was a panelist speaker in the session “Future of Technology – Important Initiatives”. He was the only poet from United States to take part in the “Kavi Sammelan”.

In 2007, Anoop was awarded “Hindi Videsh Prasar Samman” by ‘Uttar Pradesh Hindi Sansthan’ for his contribution in promoting Hindi outside of India.

In 2015, Anoop was given “Vishwa Hindi Samman” by Government of India. He was one of the youngest recipients of this lifetime achievement award given for his contribution in promoting and spreading the use of Hindi. He was invited to Bhopal where 10th Vishwa Hindi Sammelan was held in September 2015. It was inaugurated by Prime Minister Shri Narendra Modi and the award was given by Mr. Raj Nath Singh - the home minister of India.

In 2019, Anoop was invited as an official delegate to the International Hindi Conference organized by ‘Lisbon University’ in Lisbon, Portugal. He presented a paper on ‘Case Studies in Use of Technology in promoting Hindi’. At Vishwa Rang – The first International Literature and Art Festival organized by Rabindra Nath Tagore University in Bhopal, India, he took part and moderated two sessions including one on “Hindi and Technology”.

Anoop believes that the Internet and latest computer technology can play an important role in spreading Hindi across the globe and has been working aggressively on several projects to realize this goal.
हिन्दी स्क्रीन
random post
shilaadhaar
yugavaaNee
kaavya-setu
nav-kusum
pratidhwani
muktak
kaavya-lekh
submission
contact us
about us